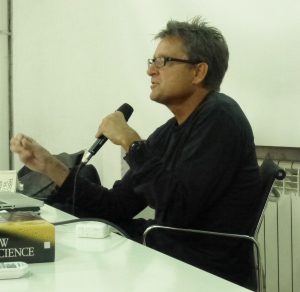 Associate Professor & Director of Doctor of Design
dleach@fiu.edu
Phone: 305-348-1615
Office PCA 386A
Neil Leach is an architect and interdisciplinary scholar. Besides teaching at FIU, he is also Visiting Professor at Harvard GSD and Tongji University, Professor at the European Graduate School, a NASA Innovative Advanced Concepts Fellow and an academician of the Academia Europaea. Previously he has taught at SCI-Arc, Architectural Association, Cornell University, Columbia GSAPP, USC, University of Nottingham and Dessau Institute of Architecture. He holds MA and Dip Arch degrees from the University of Cambridge, and a PhD degree from the University of Nottingham. Neil Leach has published 27 books, which have been translated into several languages, including Chinese, Korean, Spanish, Portuguese and Romanian. Neil has strong connections with China, where he holds a distinguished Chinese Government ‘High End Foreign Expert’ Visiting Professorship at Tongji University. He has served as Director of the American Academy in China, and has curated a series of exhibitions, including several for the Architecture Biennial Beijing. He is also one of only two architects to have been elected a member of the Academia Europaea, Europe’s leading scholarly academy that counts among its members over 50 Nobel Laureates.