Graduates from FIU’s Department of Landscape Architecture are Worlds Ahead. Read the stories below to find out more about our successful alumni family. For more Landscape Architecture alumni spotlights, events, and news stories, please visit the CARTANews website or contact Maria Claverie, Associate Director of Alumni Relations at 305-348-1805 or by email mgclaver@fiu.edu. 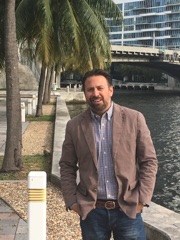 Zoning Administrator Devin Cejas sees Miami a little differently than most: when he gazes over the city, he sees potential, the location and placement of vegetation and curbs, how buildings affect the flow of people in the streets and the efficiency of public transit. With an FIU Masters of Landscape Architecture + Environmental and Urban Design degree, Cejas works to make the city better for millions of residents.

Cejas joined the City of Miami Planning and Zoning Department in early 2014, where he shortly thereafter advanced to Zoning Manager, and was subsequently appointed to Zoning Administrator in September 2015.  In his current role, he coordinates and manages the activities of the Office of Zoning. Cejas supervises all planning and undertakings related to enforcing the City of Miami’s Zoning Code for new developments and existing businesses.

“Being born and raised in the City of Miami, I have always been drawn to the dynamics of culture and community here. No matter whether you’re in Little Havana, Coconut Grove or Overtown, there is always a special charm about the people who live in these communities that’s seldom found anywhere else in Dade County. Having an opportunity to serve these communities and to apply what I have learned and practiced in the field of Urbanism is one of the main reasons I decided to serve the City of Miami,” said Cejas.

With experience assessing property damage and negotiating cost settlements under his belt, Cejas shifted gears to pursue his dream of becoming a landscape and urban designer. In 2011, he received his master’s at FIU and founded Walk Landscape + Urban Design firm. During his career as a landscape architect, Cejas specialized in residential and commercial landscape design. He also worked on regional scale-environmental projects and served as an adjunct professor at FIU.

He is a passionate advocate for public initiatives for social betterment through landscape infrastructure and urban planning, and has held leadership roles at Architecture for Humanity and the City of Miami’s Parks and Recreation and Public Spaces Advisory Board.

“The City is currently undergoing its first developmental boom during a time that being environmentally conscious is a priority. I believe having a master’s degree in Landscape Architecture + Environmental and Urban Design puts me at an advantage when making key decisions that will contribute to the City’s landscape for the years to come. Every project we see in the Planning and Zoning Department affects landscape architecture, from the placement and architecture of buildings, all forms of transit coordination and the plantings of vegetation. Our team becomes the stewards of place making along our public realm on a daily basis.”

“I strongly believe if it wasn’t for my academic career at FIU, I would not be where I am today. The rigorous daily challenges that Landscape Architecture and Architecture students face every day builds character and prepares them for immediate immersion in the professional field. I would like to personally thank Associate Professor Roberto Rovira and Adjunct Professor Gianno Feoli for their guidance and friendship.”

Cejas said he stays involved with FIU by providing critical feedback to students on their studio projects.

“Take every academic project seriously and treat them as they will be built one day. You never know! Sky’s the limit!”

David Fierabend has been a devoted student of landscape architecture and garden design for over two decades. Before obtaining his MS in Landscape Architecture from FIU, he received a Bachelor of Science from the College of New Jersey. His love of nature and the arts finds expression in all of his work. He enjoys collaborating with local artisans on projects because he believes that a range of experience should be brought to each design. David’s award-winning work ranges in scale from residential to commercial and has been featured in Philadelphia Magazine, Style Magazine, and Arts and Antiques Magazine.

As an Executive Board Member of the Pennsylvania Horticulture Society, he is committed to the greening of Philadelphia. Notable recent projects include the rooftop Sea Garden at the Children’s Hospital of Philadelphia, Morgan’s Pier restaurant on the Delaware Riverfront, and, in coordination with OLIN, the Sol LeWitt exhibit at the Philadelphia Museum of Art. To learn more his work, please click here.