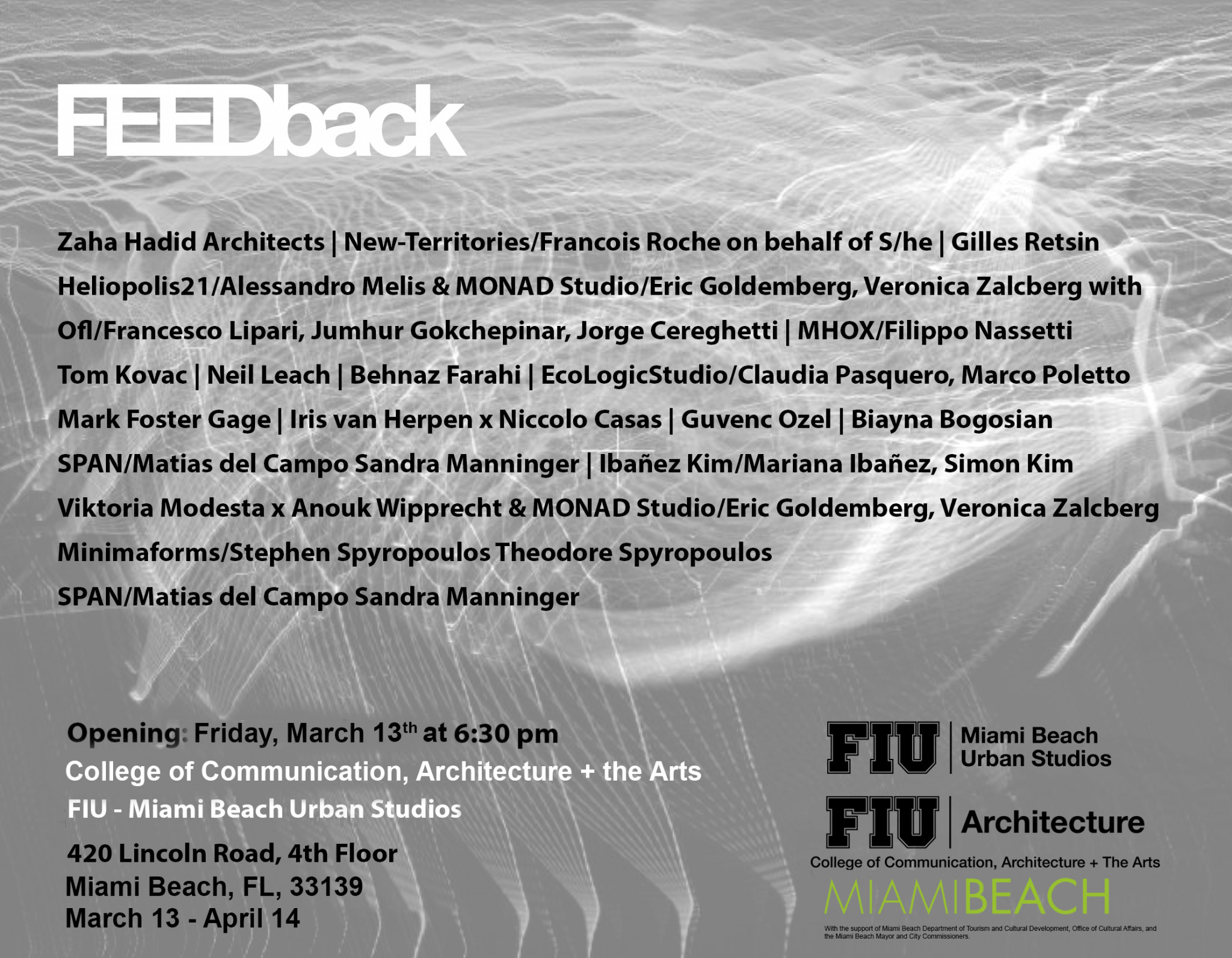 This exhibition will situate discourses of design control through essays and projects of architects, musicians, fashion designers, interactivity designers and artists, presenting their work in close proximity to distill individual disciplines, obfuscate them and elucidate on the effects that feedback – both instrumental and conceptual – has on their work. It seeks to expand upon feedback in its many iterations as a residue of an action – like guitar feedback – and as litmus of an action’s effects – like a feedback loop. There is reciprocity in feedback that is embedded in most processes of design, but that territory is thought of as ephemeral or as a check and balance. There are conditions of work that might not allow practices to see the object or effect of control, a Trans-effect that loosens the framework allowing navigation of qualities, behaviors, tactics and objects of Feedback.
The exhibition FEEDback crystallizes the notion of trans-disciplinary project in architecture, generated by experimental strategies of direct application to the scale of the human body and its mediated environment. The practices included in the exhibition have micro-tech as a common denominator and a marked search for new latent expressions in the intensified relationship between human beings and the technological universe, which increases their possibilities of acting in the tangible world. This notion of the augmented body is also a new kind of inquiry through the hybrid projects that arise from collaborations between multiple disciplines.
Feedback is sensory impulse, functional distinction and imposed separation within architecture to dislocate users – a charged programmatic relationship with audience. This disruption is tied into a keen notion of experience and behavior in architecture. Feedback could be an attempt to give users a sample of what might be enacted through an architectural relocation vis-à-vis a certain proposition of movement in space. A generous folding of shape and event can be seen through the rhythms of Feedback.
“FEEDback” has a diverse group of referents, including recent work by:
Patrik Schumacher of Zaha Hadid Architects; Iris van Herpen X Niccolo Casas; Gilles Retsin; Matias del Campo and Sandra Manninger of SPAN; Claudia Pasquero and Marco Poletto of EcoLogicStudio; New Territories Francois Roche on behalf of S/he; Viktoria Modesta X Anouk Wipprecht and MONAD Studio; Alessandro Melis; Mark Foster Gage; Mariana Ibañez and Simon Kim; Tom Kovac; Filippo Nassetti; Behnaz Farahi; Ed Keller; Neil Leach; Biayna Bogosian; Theo Spyropoulos of MINIMAFORMS, Guvenc Ozel.

To learn more about the FIU College of Architecture, click here