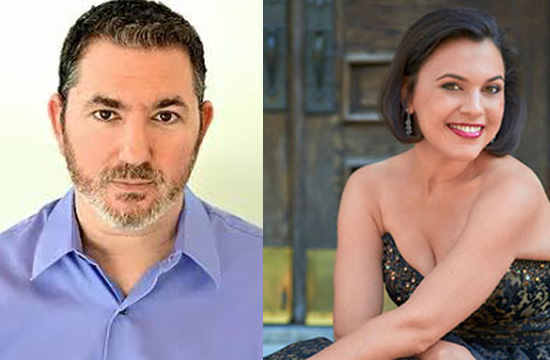 Distinguished guest mezzo-soprano Rachel Calloway and guest pianist Paul Schwartz will dazzle audiences with works by Gershwin, Berlin, Arlen, Weill, Hollaender, and more in an exploration of the Jewish experience through popular song.

As an internationally recognized leading interpreter of contemporary and modern music, mezzo-soprano Rachel Calloway brings versatility and compelling insight to stages worldwide.  Her work has been praised by the New York Times for “penetrating clarity” and “considerable depth of expression” and by Opera News for her “adept musicianship and dramatic flair.”

Ms. Calloway holds degrees from The Juilliard School (BM) and Manhattan School of Music (MM).  She joined the faculty of the Cortona Sessions for New Music (Italy) in 2014 and Juilliard Summer Arts in Geneva, Switzerland in 2016, where she will return this summer. Ms. Calloway serves on the faculty of the University of South Carolina. She is a founding member of Shir Ami, an ensemble dedicated to the preservation and performance of lost and unknown Jewish art music. She can be heard on Albany Records, Tzadik Records, BCMF Records, and Toccata Classics.

Pianist Paul Schwartz has performed more than 800 recitals in the United States, Canada, and South America. Mr. Schwartz has worked at the University of Miami’s Frost School of Music for the past 10 years and in addition to teaching, accompanying, and sight-reading, has accompanied three choral ensembles and a variety of performance classes. He is in demand as a collaborative artist for both faculty and students. While in Miami, his collaborators have included Helmuth Rilling, Michael Tilson Thomas, Robert Porco, John Corigliano, Joe Alessi of the NY Philharmonic, Seraphic Fire, Richard King and Massimo LaRosa, both members of the Cleveland Symphony Orchestra, Richard Todd, Trudy Kane, and Craig Morris, among others.

Mr. Schwartz specializes in the instruction of professional artists and prepares them for the concert stage, drawing upon his extensive knowledge in transpersonal psychology, among other modalities that aid in human development, spiritual growth, and freedom of expression. He graduated with both Bachelor’s and Master’s Degrees in Piano Performance from the Manhattan School of Music.