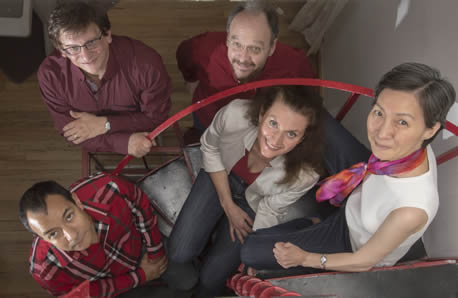 Considered one of the most important chamber music ensembles in Mexico, the Mexico City Woodwind Quintet has toured throughout the world, performing the finest and most challenging repertoire for woodwind quintet. Their program will feature a Latin American dances portion with composers ranging in background from Argentina, Brazil, Cuba, Uruguay, Mexico and elsewhere.

The Mexico City Woodwind Quintet has been in residence at the National Arts Center and the Ollin Yoliztli Music School since 1994, reaffirming the abiding commitment of the group to the education of the next generation of wind players. Through chamber music coaching and master classes as well as seminars on special topics ranging from contemporary wind techniques to double reed workshops, the members of the Mexico City Woodwind Quintet actively participate in the training of young students.

The excellence of the Mexico City Woodwind Quintet has been acknowledged by the Mexican National Arts and Cultural Fund, which awarded the group grants in 1994, 1997 and 1999. Also in 1999 they were awarded from the “Fund for Culture Mexico/USA” a grant for their project to commission works from Mexican and American composers. Not only has the Quintet presented the world premiers of works commissioned by the group, it has also performed in Mexico the premiers of important contemporary quintet literature by prominent international composers including works by Latin Americans. As a regular participant in important music festivals such as the International Cervantino Festival, the International New Music Forum and the Franco Donatoni International Contemporary Music Festival, as well as in concerts sponsored by the Mexican Fine Arts Institute, the National Arts Council and the National University, the Mexico City Woodwind Quintet has gained critical acclaim.