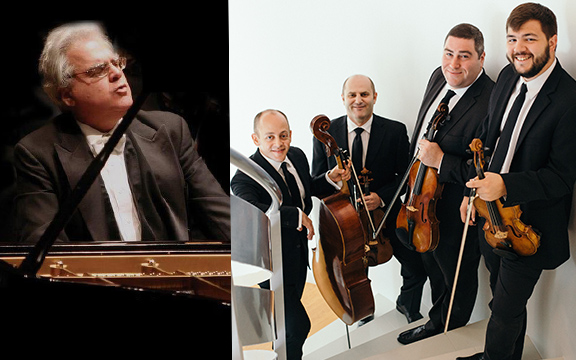 There will be a moment of silence and a brief performance of Dem Rebens Nigun (“The Rabbi’s Melody”) by Jewish composer, Aleksandr Zhitomorskii. Donations will be collected at the door for the synagogue and the victims.

FIU’s Artists-in-Residence, the Amernet String Quartet, will be joined by distinguished pianist Joseph Kalichstein, founding member of the famed Kalichstein-Laredo-Robinson Trio, in an all-Schumann program.

Acclaimed for the heartfelt intensity and technical mastery of his playing, pianist Joseph Kalichstein enthralls audiences all over the globe, winning equal praise as orchestral soloist, recitalist and chamber musician.

As an Australian critic exclaimed: “ To hear Kalichstein play is to fall in love with music all over again!”

With his diverse repertoire of works ranging from Bach, Mozart, Beethoven and Brahms to works by Bartok, Prokofiev and others, Mr. Kalichstein has collaborated with such celebrated conductors as Daniel Barenboim, Pierre Boulez, James Conlon, Christoph von Dohnányi, Charles Dutoit, Lawrence Foster, Zubin Mehta, Andre Previn, Leonard Slatkin, Edo de Waart, David Zinman and the late George Szell and Erich Leinsdorf. He has performed with the world’s greatest orchestras, from the Boston and Chicago Symphony Orchestras to the Berlin Philharmonic and the London Symphony, from the NHK and New York Philharmonic to the Cleveland Orchestra. Mr. Kalichstein has also been a frequent guest pianist with the world’s most beloved string quartets, including the Guarneri and Emerson Quartets, with whom he played the Shostakovich Piano Quintet in their Shostakovich Cycles in London and Washington.

A favorite of New York concertgoers, Mr. Kalichstein has appeared in several recitals on Carnegie Hall’s “Keyboard Virtuosi” series. His latest CD releases include music of Schumann and Brahms (on Koch International) and of Brahms, Mendelssohn and Schubert (“The Romantic Piano”, on Audiofon). He serves as the Chamber Music Advisor to the Kennedy Center and is the Artistic Director of the Center’s Fortas Chamber Music Concerts. He continues to hold the inaugural Chamber Music Chair at the Juilliard School, where he also teaches a limited number of advanced piano students.