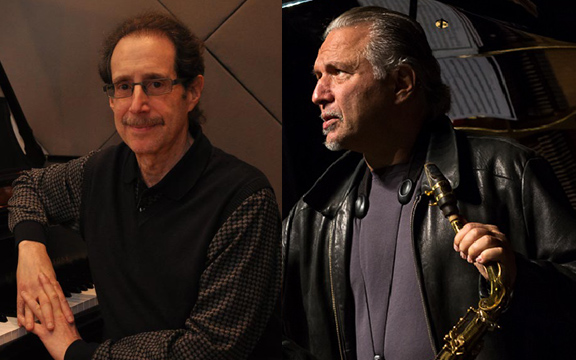 Don’t miss out on a rare performance in South Florida by two of jazz’s greatest virtuosos, famed saxophonist Jerry Bergonzi and pianist Andy LaVerne, as they take to the stage for an evening of high-powered jazz favorites.

Jerry Bergonzi first gained international recognition as the saxophonist in the Dave Brubeck Quartet from 1979 – 1982 and is widely considered among the greatest saxophonists alive today.

Bergonzi has performed throughout the world at all the major jazz festivals and jazz venues, with his own ensembles as well as with numerous jazz greats. His music is renowned for its innovation, mastery, and integrity. His discography includes more than 60 recordings, notably Standard Gonz with the Jerry Bergonzi Quartet on the Blue Note label; he also has 60 recorded song titles registered with ASCAP.

As a clinician Bergonzi has taught at conservatories and music schools throughout the U.S. and Europe. He is the author of a series of instructional books with play-along CDs and videos, entitled Inside Improvisation, published by Advance Music (seven volumes: Melodic Structures, Pentatonics, Jazz Line, Melodic Rhythms, Thesaurus of Intervallic Melodies, Developing a Jazz Language, and Hexatonics), as well as the book/CD set Sound Advice. The Inside Improvisation series is now available in French, German, and Italian translations.

Pianist Andy Laverne studied privately with the great Bill Evans and went on to perform with the likes of Frank Sinatra, Stan Getz, Woody Herman, Dizzy Gillespie, Chick Corea, Lionel Hampton, Michael Brecker, and Elvin Jones. As a prolific recording artist, his projects as a leader number over 50, the most recent are: All Ways, featuring Andy’s Piano/Organ Trio (SteepleChase), and Peace of Mind, a collection of Andy’s newest compositions (ClaveBop).

LaVerne is also a prominent jazz educator, having released a series of instructional DVD’s, Guide to Modern Jazz Piano, and Jazz Piano Standards (Homespun Tapes), featuring the Yamaha Disklavier, as well as the video, In Concert (Homespun Tapes), with guitarist John Abercrombie. A new DVD, The Art of The Duo, with Abercrombie, is being released by Mel Bay Records. Andy is the author of Handbook of Chord Substitutions, Tons Of Runs (Ekay), Bill Evans Compositions 19 Solo Piano Arrangements, and is the pianist on The Chick Corea Play-Along Collection (Hal Leonard). The Music Of Andy LaVerne (SteepleChase Publications) has recently been published. Forthcoming are Andy’s Handy Comping Companion (Aebersold Jazz), and Jazz Bach, and Jazz Chopin (Mel Bay). Countdown To Giant Steps (Aebersold Jazz) is a two CD play-a-long with companion book, of which LaVerne served as player/producer/writer, and Tunes You Thought You Knew (Aebersold Jazz) is a LaVerne play-a-long CD/book set. Secret of the Andes, a collection of LaVerne originals, is Andy’s newest offering from Aebersold Jazz.

Andy is a frequent contributor (since 1986) to Keyboard Magazine, and Piano Today Magazine. His articles have also appeared in Down Beat, Jazz Improv, Piano Quarterly, Jazz and Keyboard Workshop, and JazzOne.

Andy is the recipient of five Jazz Fellowships from the National Endowment for the Arts, and winner of the 2000 John Lennon Songwriting contest for his tune Shania. He has appeared at concerts, festivals, and clubs throughout the world, and has also given clinics and Master classes at universities, colleges, and conservatories worldwide. Recently he has toured and recorded with legendary singer/songwriter Neil Sedaka. LaVerne is Professor of Jazz Piano at The Hartt School (University of Hartford), and on the faculty of the Jamey Aebersold Summer Jazz Workshops.