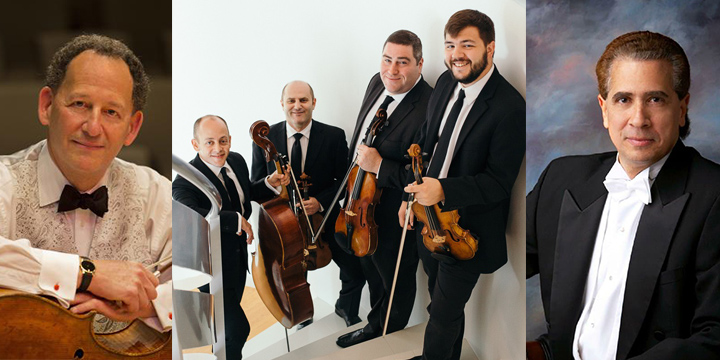 Satisfy your thirst for a night of chamber music masterpieces with the highly acclaimed Amernet String Quartet, cellist and Executive Director of the internationally renowned Montreal Chamber Music Festival Denis Brott and Music Director of the Lynn Philharmonia Guillermo Figueroa.

The list of his teachers includes some of the world’s best cellists: Leonard Rose at the Juilliard School of Music (1964-1968), Janos Starker at Indiana University (1968-1971), and Gregor Piatigorsky at the University of Southern California (1971-1975).  Mr. Brott’s career began in 1973 when he won 2nd Prize in the Munich International Cello Competition.  His concert tours have taken him to four continents and numerous festivals including Marlboro, Sitka, Santa Barbara, Toronto, Ottawa, Parry Sound and Banff.

His many solo recordings include the three Brahms Sonatas for cello and piano and Homage to Piatigorsky, perhaps his best known recording. It received this accolade from Yo-Yo Ma:  “His playing throughout is exemplary, full of the rich sound and technical wizardry the master exemplified.  I think Piatigorsky would be proud.”

He has appeared as soloist with such great conductors as Zubin Mehta, Franz-Paul Decker, Mario Bernardi and Yoav Talmi. He has also appeared as guest cellist with such distinguished quartets as the Guarneri, Emerson, Tokyo and Fine Arts.

A devoted chamber musician, Denis Brott spent eight years in the Orford String Quartet (1980 – 1988) during which time he recorded 25 CD’s.  Especially acclaimed were the recordings of the complete string quartets of Beethoven on the Delos label, which won the Grand Prix du Disque (1988) and two Juno Awards (1985, 1987) for Best Chamber Ensemble Classical Recording. Denis has also appeared as guest with prestigious ensembles including the Guarneri, Emerson, Tokyo and Fine Arts String Quartets.

One of the most versatile and respected musical artists of his generation – renowned as conductor, violinist, violist and concertmaster – Guillermo Figueroa is the Principal Conductor of the Santa Fe Symphony Orchestra. He is also the Music Director of the Music in the Mountains Festival in Colorado and Music Director of the Lynn Philharmonia in Florida. He is the founder of the highly acclaimed Figueroa Music and Arts Project in Albuquerque. Additionally, he was the Music Director of both the New Mexico Symphony and the Puerto Rico Symphony. With this last orchestra, he performed to critical acclaim at Carnegie Hall in 2003, the Kennedy Center in 2004 and Spain in 2005.

Lauded for their “intelligence” and “immensely satisfying” style of play by the New York Times, the Amernet String Quartet has garnered worldwide praise and recognition as one of today’s exceptional string quartets. Ensemble-in-Residence at Florida International University since 2004, the group was formed in 1991 while its founding members were students at the Juilliard School.

The Amernet rose to international attention after its first season, winning the gold medal at the Tokyo International Music Competition in 1992, followed by the grand prize at the Banff International String Quartet Competition in 1995.  Their busy performance schedule has taken the quartet across the Americas, Asia, Europe, and the Middle East, and they have collaborated with many of today’s most prominent artists.  Prior to their current position at Florida International University, the Amernet held posts as Corbett String Quartet-in-Residence at Northern Kentucky University and at the University of Cincinnati College-Conservatory of Music.  Additionally, during 2004-2005 the ensemble served as the Ernst Stiefel Quartet-in-Residence at the Caramoor Center for the Arts.  Aside from the standard repertoire, the Amernet has always been committed to the music of our time and has commissioned and recorded works by many of today’s leading composers including John Corigliano, Steven Gerber, Toshi Ichiyanagi, Harold Meltzer, Morton Subotnick, Dmitri Tymoczko, and Chinary Ung.

One hundred percent of the money raised through the FIU Disaster Response and Recovery Fund will go to helping those impacted. Please help support FIU families and keep students from the affected areas in school and progressing toward their degrees. – GIVE NOW!  Join us in being #FIUstrong. Cash donations taken at the door.