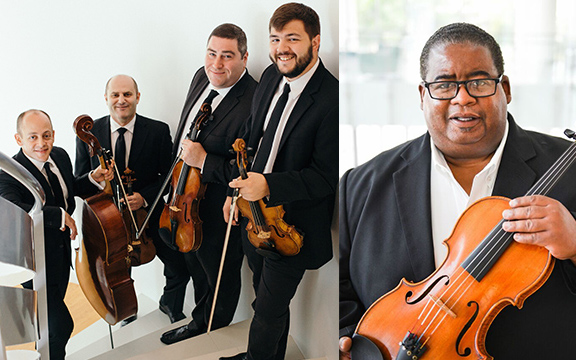 For this performance, the acclaimed Amernet String Quartet teams up with violist Chauncey Patterson for a sampling of Mozart’s Viola Quintets. This concert is free, no ticket required. Sponsored by a grant from the City of Miami Beach Cultural Arts Council.

Chauncey Patterson has garnered an impressive career as chamber musician, teacher, soloist, and orchestral player. He began his professional career at the age of 23 as Assistant Principal Viola of the Denver Symphony, and was eventually appointed Principal Viola by  Music Director Phillipe Entremont.  His next post was Principal Viola of the Buffalo Philharmonic under the direction of Seymon Bychkov.  During his stay in Buffalo, Mr. Patterson was offered and accepted the viola position in the award-winning Miami String Quartet.  During his 15 year tenure, the MSQ garnered awards in the quartet competitions of London and Evian, in addition to being the first string quartet to win the Concert Artist Guild New York Competition. The Quartet toured the U.S. extensively playing virtually every high profile venue including performances at Lincoln Center, Kennedy Center, Carnegie Hall, and the Hollywood Bowl.