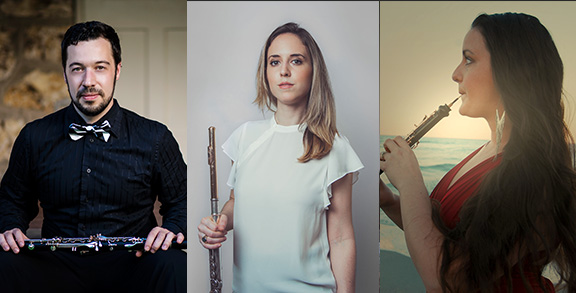 FIU clarinet faculty Jesse Gilday teams up with oboist Kimberly Everett Ganong and flutist Gina Izzo for a diverse program of woodwind trio works old and new, ranging from the French with Saint-Saëns, to the English with Arnold, and to the American with Kibbe.

Jesse Gilday’s clarinet playing has been described by the South Florida Classical Review as “carefully and beautifully shaped” and “precise.”  Originally from Troy, NY, Mr. Gilday has performed with the Symphony of the Americas and New World Symphony in South Florida, as well as numerous chamber ensembles following his time in New York City as a freelance clarinetist.

In addition to his faculty position at Florida International University, Mr. Gilday teaches for Miami Music Project, a non-profit educational organization inspired by the Venezuelan program, El Sistema, which advocates social change through music.  As doctoral teaching assistant at the University of Miami – Frost School of Music, Mr. Gilday has performed with Grammy winner Jorge Mejia of Sony Latin and Jeff Beal, House of Cards composer.

Boise, Idaho based oboist Kimberly Everett Ganong is an active solo, orchestral, and collaborative artist of great versatility. She has performed locally as guest principal and as a substitue oboist with the Boise Philharmonic, Opera Idaho, with the Boise Baroque Chamber Orchestra, the Meridian Symphony, Millennial Choirs and Orchestras, and at the Idaho Shakespeare Festival. Kim spent six years in Miami, Florida as a member of the Florida Grand Opera and Palm Beach Symphony. She is formerly a member of the El Paso Symphony Orchestra, and she has frequently performed with both the American Youth Symphony and YMF Debut! Orchestras in Los Angeles. In New York City, Ms. Ganong has performed with the Bergen Symphony, One World Symphony and String Orchestra of Brooklyn, in addition to innumerable chamber and freelance engagements.

Kim was a winner of the NYU Concerto Competition in 2011 along with flutist Gina Izzo. Kim has collaborated with prominent conductors including Cristian Macelaru, Tito Muñoz, James Newton Howard, Alexander Polianichko, Alan Silvestri, Jerry Steichen, Jaime Laredo, Case Scaglione and Marco Armiliato. She has been a participant in the New York String Orchestra Seminar, New Hampshire Music Festival, Texas Music Festival, and the Boston University Tanglewood Institute. Kimberly recently completed her DMA at the University of Miami, and also holds degrees from CalArts (BFA), and NYU (MM). She is also a proud graduate of the Interlochen Arts Academy.

NY-based flutist Gina Izzo “Rattles speakers and expectations with stop-time razzle, vocal (flute-talk) and electronic (phaser) effects” (NYC Jazz Record), with a background ranging from classical to electronic, free improvisation, and new music. Gina has recently performed at Lincoln Center Out of Doors with Revive Music, at The Jazz Standard as part of Ambrose Akinmusire’s The Imagined Savior is Far Easier To Paint, at John Zorn’s The Stone alongside Todd Reynolds and Jeffrey Zeigler, and at venues including Jazz at Lincoln Center, Carnegie Hall, David Geffen Hall, Merkin Concert Hall, The Public Theater, the Jazz Standard, and the Bang on a Can Festival, among others.

Gina is the co-founder of RighteousGIRLS with pianist Erika Dohi. RighteousGIRLS debut album gathering blue (New Focus Recordings) featuring works by composers such as Andy Akiho, Ambrose Akinmusire, and Vijay Iyer has been met with critical acclaim from both jazz and contemporary-classical critics alike; Jackson Cooper, from I Care If You Listen, called it “…one of the most adventurous new music debut albums in recent years.” gathering blue received a 4.5 stars rating by John Ephland in DownBeat magazine. The duo has received a 2016 IMPACT award, and 2015 New Music USA Project Grant, and has been featured on Q2 Music, WQXR, and WNYC and at SubCulture alongside Steve Coleman & the Five Elements and Rudresh Mahanthappa and the PRISM Quartet.

Gina has worked with National arts organizations in music programming, professional development, management, and marketing including Welltone New Music at Symphony Space, the Paul Taylor Dance Company, the Interlochen Arts Academy, and Chamber Music America, where she currently serves as Manager of Public Programs and National Conference. She has programmed concerts in venues including Harlem Stage, Flushing Town Hall, the DiMenna Center, National Sawdust, and Bryant Park’s INTERSECT music festival.  Gina’s work in professional development and entrepreneurship extends through programming and leading workshops and panels as a guest speaker at institution such as the Berklee College of Music, the Manhattan School of Music, the Colburn School, among others. In 2018, she co-founded bespoken, a music mentorship program providing mentorship, workshops, and strategies to help elevate the visibility of women in the classical, contemporary, and jazz industry.

As an active orchestral musician, Gina has played under conductors like Kurt Masur, Eric Jacobsen, JoAnn Falletta, and George Manahan and has worked with musicians including Linda Chesis, Judith Mendenhall, Sir James Galway, Robert Langevin, Carol Wincenc, and Paula Robison, David Krakauer, and Charles Neidich. As an advocate for arts education, she has been on the faculty at the Manhattan School of Music Summer program and as an adjunct teacher artist at New York University.

Gina received her B.M. from the Manhattan School of Music and M.M from New York University.