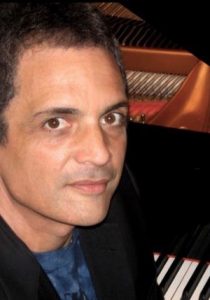 Armando Tranquilino is a composer, conductor and pianist whose compositions include chamber, orchestral, electro-acoustic, and film music. Born in Havana, Cuba, he immigrated to the United States with his parents at the age of 7 and began his musical studies at the age of 9 in Miami, Florida, where he studied piano with Arminda Schutte, a protégé of the virtuoso Russian pianist Joseph Lhevinne. He subsequently studied composition and electronic music at Indiana University with Earle Brown and Claude Baker and earned his M.M. and D.M. (1997) from that institution.

Since 2004, Dr.Tranquilino has been a faculty member at Florida International University, where he created and developed the course “The History of The Beatles,” making F.I.U. the first Florida University to include the class in its curriculum. The following year he was voted “Best Professor to Jam With” in the annual ‘Best of Miami’ edition of the 2007 Miami New Times for his lectures on The Beatles, sponsored and presented by Culture in the City. At FIU he has also collaborated with the Theatre Department as musical director of The Who’s “Tommy” (2008) and as composer of the theatrical production of “The Birds” (2009).

As a composer, Tranquilino has received a number of professional honors and has been involved in various collaborations and interdisciplinary projects, including 1st Prize in the 16th International Electroacoustic Music Competition of Bourges, France with the composition Tragoidia/Komoidia, a Cintas Fellowship in Music Composition, a Florida Individual Artist Fellowship, a commission by the Fronhof Gallery in Leutesdorf, Germany for Intervallic Absence: a multi-media work done in collaboration with artist Merja Herzog-Hellsten, as well as guest composer at various festivals throughout Europe and the United States. Since 2008 he has been the musical director of F.I.U.’s Classically Cuban Concerts. These concerts, done in collaboration with independent scholar Emilio Cueto, have been presented at F.I.U.’s Wertheim Performing Arts Center, the San Carlos Institute of Key West., Florida, and Merkin Hall in New York City; the latter was sponsored by the New York Historical Society and the Cuban Cultural Center of New York. Tranquilino’s music is available through Cultures Electroniques/Harmonia Mundi.