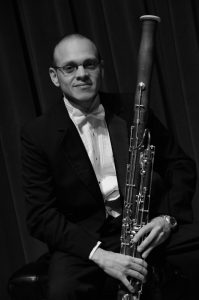 Carlos Felipe Vina is a bassoonist based in Miami, Florida. Born in Colombia, he began his musical studies at the Conservatorio de Musica del Tolima. He was awarded a full scholarship to attend Lynn University as well as a fellowship to attend the University of Miami, Frost School of Music as part of the Henry Mancini Institute.

Dr. Vina has been the recipient of numerous awards and prizes, including performing as a prize winner on the Lunes de los Jovenes Interpretes from the Luis Angel Arango Library (Bogota, Colombia) in 2004, winning the youth soloist competition with the Orquesta Filarmonica del Valle in 2006, and also winning the Lynn University Concerto Competition in 2009. He has appeared as a soloist with orchestras such as Orquesta Filarmonica del Valle, Orquesta Sinfonica E.A.F.I.T, and Lynn Philharmonia.

Dr. Vina is an active performer in several professional orchestras around South Florida. Dr. Vina joined the faculty of the Florida International University in 2016.