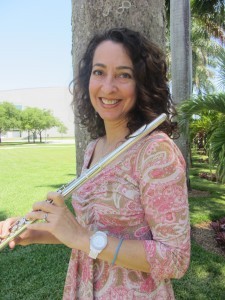 Elissa Lakofsky’s professional career began with an appointment in the Chicago Civic Orchestra, the training orchestra of the Chicago Symphony. Since arriving in South Florida, Ms. Lakofsky has performed as Principal Flute in many of the highest profile Miami orchestras including Orchestra Miami, the Florida Grand Opera, Miami City Ballet, and the Florida Symphonic Pops. In addition to her orchestral career she has been privileged to work with opera artists such as Andrea Bocelli and Placido Domingo, various jazz artists such as Peter Nero and Latin artists Nestor Torres and Arturo Sandoval. Most recently, she performed in the orchestra for the Broadway musical Wizard of Oz during its U.S. tour.

Ms. Lakofsky is a much sought after clinician and instructor and currently teaches at both Florida International University and Florida Atlantic University. As a soloist, Ms. Lakofsky has performed with the Savannah Symphony, the Greater Miami Youth Symphony, Florida International University Wind Ensemble, Florida Atlantic University Wind Ensemble, Boca Symphonia and Bay View Orchestra. Ms. Lakofsky can be heard with Nodus on Orlando Garcia’s CD Silencios Imaginados (nominated for a Latin Grammy in 2010), Fives for Five, Florida Woodwind Quintet, 2007 and Mahler First Symphony, with the Florida Philharmonic Orchestra. She has toured and performed in Taos, New Mexico, Ravello, Italy and premiered the Stockhausen Opera Samstag aus Licht at La Scala in Milan, Italy.

A graduate of two of the most prestigious woodwind schools, the University of Michigan (BM) and Northwestern University (MM), Ms. Lakofsky has also studied extensively with the some of the world’s most renowned flutists including Keith Underwood, William Bennett and Julius Baker. She has participated in many summer music festivals including the Aspen Music Festival, the Bach Aria Group and the Sarasota Music Festival. Ms.Lakofsky is a past winner of the National Flute Association Competition.