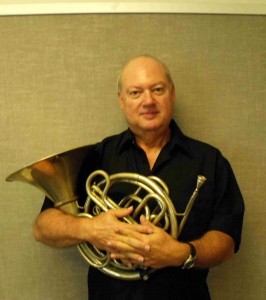 Eric Kerley is a 1970 graduate of South Dade High School in Homestead, Florida. Immediately upon being honorably discharged from the US Army in 1975 he began studies at the University of Cincinnati’s College-Conservatory of Music, earning a Bachelor of Music degree in 1979. Eric performed as an extra and substitute in the horn section of the Cincinnati Symphony while an undergraduate student. In 1980, he was appointed 4th horn of the Florida Philharmonic (Miami) and began graduate studies at the University of Miami in 1981, which awarded him the Master of Music degree in 1983. Mr. Kerley was employed from 1996 to 2001 by a German production company presenting European tours of Broadway shows. Titles included West Side Story, My Fair Lady, Evita, Crazy for You, and Die Schoene un das Biest, which was nicht von Disney und auch auf Deutsch gesungen. In 2001 Eric returned home to play 4th horn for Florida Grand Opera, and remained in that position through the close of the 2007-2008 season. He is currently the Principal Horn of the Palm Beach Pops Orchestra and Principal Horn of Symphony of the Americas. He has served FIU as instructor of horn and ear training, being first appointed as horn instructor in the fall of 1984.