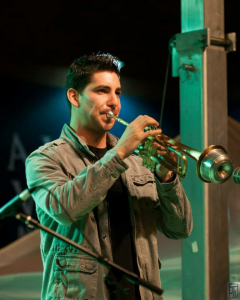 Francisco Dimas is an Adjunct Professor of Jazz Trumpet at Florida International University. He currently hold a M.M. in Jazz Pedagogy and B.M. in Studio Music and Jazz from the University of Miami’s Frost School of Music. Mr. Dimas is also on faculty at Miami Dade College and is currently a member of the South Florida Jazz Orchestra, Sammy Figueroa’s Latin Jazz Explosion, the 14 Jazz Orchestra, Kravis Pops, South Florida Symphony, and tours around the world with KC and the Sunshine Band. In addition to his very active freelance career, Francisco’s musical versatility lends itself to the recording studio, making him one of the most in-demand session players in South Florida. In addition to recording for many local bands and projects, Cisco has recorded with such artists as Natalie Cole, Gloria Estefan, Juanes, Charles Calello, Deanna Martin, Joseph Leo Bwarie and Ed Calle.

Since moving to Miami in 2004 from his native town of Albuquerque, New Mexico, Cisco has managed to not only perform with many different bands of all styles of music from jazz to latin to hip- hop, but has toured with many world famous artists, from Linda Ronstadts’ entire 2005-2007 Hummin’ to Myself tour, to numerous performances across the globe with artists such as Basement Jaxx, Jon Secada, Gloria Estefan and the Miami Sound Machine, Gino Vannelli, and Sammy Figueroa’s Latin Jazz Explosion.