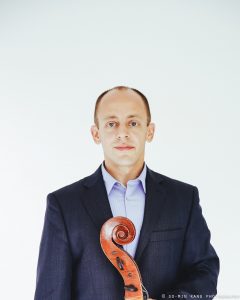 He has collaborated in chamber music with members of the Cleveland, Curtis, Juilliard, and Miami quartets and with principal players of most of the world’s leading orchestras, as well as with artists including Shmuel Ashkenasi, Robert deMaine, Roberto Diaz, Guillermo Figueroa, Pascal Gallois, Gary Hoffman, Ida Kavafian, Kim Kashkashian, Seymour Lipkin, Ricardo Morales, Michael Tree, and the Penderecki and Tokyo quartets. Mr. Calloway gave his Carnegie Hall recital debut under the auspices of Artists International and has also been heard in New York at Alice Tully Hall, Jazz at Lincoln Center, Steinway Hall, the Museum of Modern Art, the Kosciuszko Foundation, the 92nd Street Y, and the Polish Consulate; in Los Angeles at Disney Hall, the Bing Theatre, the Skirball Center and Pepperdine University; in Washington, D.C. at the Kennedy Center and at Strathmore; in Philadelphia at the Academy of Music, the Ethical Society, and the Kimmel Center; and live on NPR, WFMT (Chicago), KMZT (Los Angeles), WQXR (NYC), WFLN (Philadelphia), and RAI television (Italy) as well as on recordings for Bridge, Naxos, and Albany records.

A devoted advocate of new music, Mr. Calloway has performed with leading ensembles around the world as well as alongside members of Ensemble Modern, Klanforum Wien, and the Arditti and JACK quartets, and with the New Juilliard Ensemble both in New York and abroad, in addition to frequent appearances in Philadelphia with Bowerbird, Soundfield, and Network for New Music and in Miami for FETA and Acoustica 21. Among the hundreds of premieres he has presented are solo and ensemble works of Berio, Knussen, Lachenmann, Pintscher, and Tüür, and he has collaborated intensively with some of today’s most important composers including Birtwistle, Carter, Davidovsky, Dusapin, Henze, Hosokawa, Husa, Franke, Rihm, Roustom, Ueno, and Yannay. As a dedicated supporter of young composers, he has frequently presented concerts of solo cello works newly composed for him, most recently at Drew, Harvard, and Temple universities, and at Spoleto USA gave the public premiere of Yanov-Yanovsky’s Hearing Solutions for cello and ensemble, in addition to appearances at Bowdoin College, the College of Charleston, Princeton University, and the University of Wisconsin at Milwaukee. In the past season, he also established a partnership with the bassoonist Martin Kuuskmann in the premiere of Helena Tulve’s new quintet at the Järvi Festival.

Mr. Calloway prizes his work with Pierre Boulez and the Ensemble InterContemporain, both at the Lucerne Festival and at the Zug (Switzerland) Kunsthaus in Schoenberg’s Pierrot Lunaire and Serenade as part of a major Kandinsky/Gerstl exhibit, in addition to his collaborations with violinist Gilles Apap, tap dancer Savion Glover, and Cantor Netanel Hershtik. He is artistic director of Shir Ami (www.shiramimusic.com), an ensemble dedicated to the preservation and performance of Jewish art music suppressed by the Nazis and Soviets, with which he appears frequently across the US and in the ensemble’s varied performances in Austria, Hungary, and Italy. He has also performed across the US, Estonia, and Serbia in a duo with his wife, violinist Mari-Liis Päkk, which explores the rich contemporary literature for violin and cello. Jason Calloway is a graduate of the Juilliard School and the University of Southern California, where his teachers have included Ronald Leonard, Orlando Cole, Rohan de Saram, Lynn Harrell and Felix Galimir. Mr. Calloway performs on a 1992 Michèle Ashley cello, a copy of the famous Sleeping Beauty of Montagnana, formerly owned by his teacher, Orlando Cole. Mr. Calloway is a native of Philadelphia.