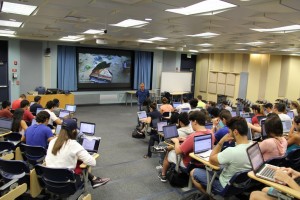 Luis Gomez-Imbert, affecionately known by his students as “G-Man,”joined the faculty of Florida International University in the fall of 1994 as Professor of double bass and Director of the FIU New Music Ensemble. Raised in the rich Venezuelan musical tradition, Luis has been surrounded by countless influences on his development as a performer and teacher. His love for the double bass began when Mr. Gomez-Imbert decided to study with artists such as Jeff Bradetich, Gary Karr, Bertram Turetzky, Frantisek Posta, David Walter, and Edgar Meyer.

Mr. Gomez-Imbert was featured alongside Gary Karr on ABC Good Morning America broadcast in the summer of 1988. Soon after, he began to showcase his instrument and new repertoire in venues across Europe and the Americas. He has recorded for the Lyric and OO labels. One of these recordings was awarded the 1992 new recording of the year by the Contemporary Record Society, by a panel which included George Crumb, Milton Babbitt, and Yo-Yo Ma.

Mr. Gomez-Imbert has also studied the orchestral literature with Warren Benfield and Joseph Guastafeste of the Chicago Symphony Orchestra; Edwin Barker of the Boston Symphony Orchestra; and Harold Robinson of the Philadelphia Orchestra. Additionally, with Lucas Drew, principal bass of the former Florida Philharmonic, Mr. Gomez-Imbert premiered a concerto for two double basses in Venezuela and at the double bass world convention held at Indiana University in 1994.