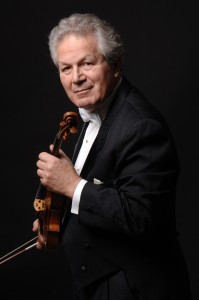 In addition to his solo engagements, Mr. Davidovici is Artist-in-Residence and Professor of Violin at Florida International University and serves as guest professor at distinguished music schools around the world, most recently at Tokyo’s Musashino Academia Musicae, the universities ofWashington and British Columbia and the Australian National University. His multi-faceted career has included appointments as Concertmaster of the Vancouver Symphony Orchestra, The Netherlands’ Residentie Orkest and Japan’s Osaka Philharmonic Orchestra and Guest Concertmaster of the Cincinnati Symphony Orchestra, as well as the orchestras of the Chautauqua, Colorado and Grand Teton music festivals.