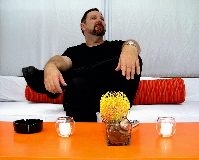 Robert C. Grabowski is an educator, author, bassist, Jazz historian, composer, arranger, audio engineer, and visual artist and has held the position of Adjunct Professor in Jazz Studies at Florida International University for over twenty-nine years. Throughout the year, he teaches jazz history to approximately fifteen hundred students. He has also written the text for the course, The Evolution of Jazz In America, now published as an e-text by Kendall-Hunt Publishing.

He produced the FIU Jazz Festival for ten years, featuring such artists as David Sanborn and Maynard Ferguson. He co-wrote and produced four National Endowment for the Arts Jazz Masters grants featuring Clark Terry, Nat Adderley, Louis Bellson, and Dr. Billy Taylor. He is an active writer and musician, having recorded seven cds of his own work. The latest, Deepest Blue, won rave reviews from the Miami Herald. He has recorded livc at the Kennedy Center with Alan Harris, and in the studio with Melton Mustafa, Ira Sullivan, Phil Strange, Larry Marshall, and many others. He holds a MMEd with emphasis in Jazz Studies from FIU (‘90), with graduate work at FSU and UM as well. His BM was from UM in Composition and Conducting. His major professors have included Dennis Kam, Lucas Drew, John Boda, Fredrick Fennell, and Dick Dunscomb.

He is a radio personality, having hosted Monday Night Jazz on WLRN, the NPR affiliate for South Florida for over two years and had a regular show on WTMI for nine years. . His teaching outside FIU includes being an Artist in Residence for Arts in America in 2006, teaching Jazz History at various MDC Campus, lecturing in Jazz History for the New World School of the Arts, and was chosen as a Artist in Residence for the Thelonius Monk Institute and taught Jazz Composition and Arranging Techniques at NWSA as part of that program. He is, in 2014, starting his seventh season of lectures for Larry Rosen’s Jazz Roots series, and is hosting his own intimate Jazz Series at Café Moka in Tavenier in the Florida Keys. He is, in addition, a noted underwater art photographer and has been exhibited in some of South Florida’s best known galleries.