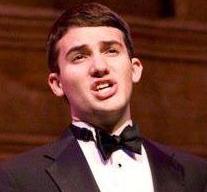 Scott Tripp received a Master of Music degree in Voice Performance from the Florida International University School of Music and a Bachelor of Muisc degree from Florida Southern College. Mr. Tripp is an experienced recitalist and opera singer, having performed such roles as Sam in Kurt Weill’s Street Scene, Saint Brioche in The Merry Widow, Goro in Madama Butterfly, Prince Charming in Massenet’s Cendrillon, Quint in Britten’s The Turn of the Screw, and Paco in de Falla’s La Vida Breve. He has appeared in oratorios, concerts, and galas across the state of Florida including performances with Miami’s Alhambra Orchestra, Central Florida’s Bach Society, and Imperial Symphony Orchestra. He currently teaches voice and music theory at the FIU School of Music and also teaches at New World School of the Arts.