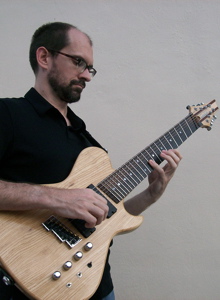 Eight- and six-string guitarist and composer Tom Lippincott was born in New Jersey in 1966, and grew up in Tulsa, Oklahoma. In Tulsa, he sought study with Randy Wimer before deciding to continue his studies in college. He received a bachelors degree in jazz studies from the University of North Texas, and a masters degree in jazz performance from the University of Miami. He has also studied with noted jazz guitarist and educator Mick Goodrick. Tom has performed throughout the world as a sideman, with his own groups, and as a solo performer. He currently leads the Tom Lippincott Trio and has performed extensively as a session player. His playing and/or compositions are featured on his 2000 CD Painting the Slow Train Brown, as well as with the group Active Ingredient’s 1990 CD, Extra Strength, and the Chassidic Jazz Project’s Live At the Broward Center for the Performing Arts, among others. Tom teaches private jazz guitar, jazz improvisation, and jazz guitar ensemble at Miami Dade College’s Kendall campus, as well as private jazz guitar and guitar ensemble at Florida International University.