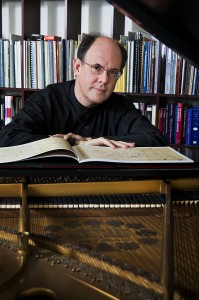 Dr. José R. López is Associate Professor and Coordinator of the Keyboard Studies Program at Florida International University in Miami. Dr. López is the President of the South Florida Chapter of the American Liszt Society, inaugurated in 2010 at FIU and since 2017 the Honorary Secretary of The Alkan Society, based in London. He has performed throughout the United States, Italy, and Central and South America with orchestras, in solo recitals, and with chamber groups in summer festivals such as the Music Festival of the Hamptons in New York and the Killington Music Festival in Vermont. Active throughout South Florida, he has been a featured performer in the Florida International University’s Music Festival; ISCM New Music Miami Festival, the Palm Beach Chamber Music Festival, Coral Gables’ Mainly Mozart Series, University of Miami’s Miami Festival, and as founder and co-director of the Deering Estate at Cutler’s “Chamber Concert Series” during its 12 years of existence.

Lopez’s solo CD’s on the Toccata Classics label have received positive and exciting reviews from major publications throughout the world. Vol. I of Alkan’s complete piano transcriptions of selected Mozart works elicited praise from critic Paul Driver of the Sunday Times (London), who wrote:

“Alkan’s complete piano transcriptions of Mozart’s music make a sequence both diverting and profound. Lopez, who in the booklet explains Alkan’s treatment of the D minor Piano Concerto, K466, in extraordinary detail, plays captivatingly. One doesn’t miss the orchestra at all.”

López’s recording of the complete solo piano music by Riccardo Malipiero, released in the summer of 2012, has also received favorable reviews by critic Tim Smith in The Baltimore Sun, in Music Web International and in Fanfare magazine.

His CD recordings on Toccata Classics dedicated to ‘forgotten’ Cuban composers, launched in 2016 with a CD of solo piano works by José Comellas (1842-1888), continued in 2019 with a volume of operatic transcriptions and solo works of Nicolás Ruíz Espadero (1832-1890). This latest release complements the premiere publication of Espadero’s unpublished Transcendental Etudes on the Cuban Musical Patrimony series in fall 2021, after almost 150 years.

A versatile pianist and enthusiastic performer of chamber music, López’s interest in contemporary music has resulted in frequent world premieres and collaborations with composers, along with the keen pursuit in resurrecting rarely heard works by Romantic and Classical composers. López received his MM and DMA degrees from the University of Miami School of Music, where he studied with Dr. Rosalina Sackstein, a former pupil of Claudio Arrau and Rafael de Silva. He has recorded for SNE, Albany, Innova, Centaur, and Toccata Classics record labels.