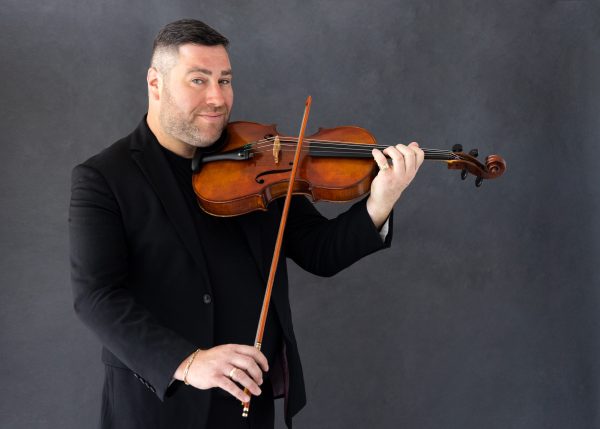 Born in 1978 in Rochester, NY, Michael Klotz made his solo debut with the Rochester Philharmonic at the age of 17 and has since then appeared as soloist with orchestra, recitalist, and chamber musician throughout the world. Of a recent performance of the Brandenburg Concerto No. 6 with violist Roberto Diaz, the Portland Press-Herald proclaimed, “this concert squelched all viola jokes, now and forever, due to the talents of Diaz and Klotz”. The Fort Worth Star-Telegram recently proclaimed Michael Klotz to be “a superb violist, impressive, with an exceptionally attractive sound,” and the Miami Herald has consistently lauded his “burnished, glowing tone and nuanced presence.”

Passionately dedicated to chamber music, Klotz regularly performs with many of today’s most esteemed artists, having appeared as guest violist with the Shanghai, Ying, and Borromeo String Quartets, and collaborated with artists such as Shmuel Ashkenasi, Arnold Steinhardt, James Ehnes, Vadim Gluzman, Gary Hoffman, Carter Brey, Michael Tree, Robert DeMaine, Andres Diaz, Roberto Diaz, Joseph Kalichstein, and Franklin Cohen, as well as with many principal players from major U.S. orchestras.  In 2015 he was named a Charter Member of the Ensemble with the Chamber Music Society of Fort Worth. In 2002 and 2009, he was was invited by Maestro Jaime Laredo to perform with distinguished alumni at anniversary concerts of the New York String Orchestra Seminar in Carnegie Hall.

Michael Klotz is a graduate of the Eastman School of Music, where he was awarded the Performer’s Certificate. In 2002 he became one of the few individuals to be awarded a double Master’s Degree in violin and viola from the Juilliard School. At Juilliard, he was the recipient of the Tokyo Foundation and Gluck Fellowships. His principle teachers and influences include Zvi Zeitlin, Lynn Blakeslee, Lewis Kaplan, Toby Appel, Peter Kamnitzer, and Shmuel Ashkenasi. A dedicated teacher, Klotz is Senior Instructor and Artist-in-Residence at Florida International University in Miami, where he teaches viola and chamber music.

Klotz has recently presented highly acclaimed master classes at the Cleveland Institute of Music, University of Michigan, Penn State  University, University of Nevada – Las Vegas, Ithaca College, Texas Christian University, and West Virginia University. Since 2015 he serves as Director of Chamber Music and Viola Instructor for the Miami Summer Music Festival where he curates a highly successful series of chamber music concerts featuring artist faculty of the festival and students at The Betsy Hotel in Miami Beach and Barry University. He has also been a member of the artist faculty of the Bowdoin International Music Festival, the Beverly Hills International Music Festival, and the Killington Music Festival. His former students currently attend and are graduates of prestigious conservatories, including the Curtis Institute of Music, the Juilliard School, Indiana University, and the Cleveland Institute of Music and are already achieving leading roles in the music world. Michael was featured in the November 2013 issue of the “Alumni Spotlight” in the Juilliard Journal and as the subject of Strad Magazine’s “Ask the Teacher” column in the November 2013 issue. Michael Klotz resides in Hallandale Beach, FL with his wife Kelly and sons Jacob and Natan, as well as two dogs and a cat.