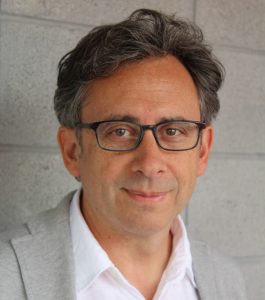 Associate Professor
andiaa@fiu.edu
Phone: 305/348-6703
Office PCA 374B
Alfredo has taught in different capacities at U. of Cincinnati, U.C. Berkeley, and has been an invited lecturer to more than 20 universities and research institutes in Argentina, Chile, Denmark, Italy, Japan, South Africa, USA, and Venezuela. Dr. Andía combines his interest and expertise in architectural design, digital technologies and design theories. He has more than 45 papers published on these subjects in venues such as Leonardo, Journal of Architecture Education, and conferences such as Siggraph, Sigradi, ACSA, IMCL and Networked Realities Japan. He is the founder and coordinator of the Internet Studio initiative. The “iStudio” has became one of the largest experiences in collaborative design studio education in the world in which eleven schools of architecture in Latin America, South Africa, and the U.S. have participated. The teaching experiences have been featured in significant media pieces in the BBC, Discovery Channel, Government Video Magazine, Archigeo Magazine in Italy, AP and UPI wire, and in other media outlets in Argentina, Chile, and France.