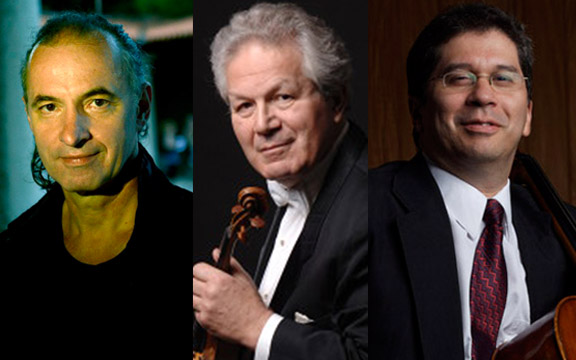 FIU Artists-in Residence, pianist Kemal Gekic and violinist Robert Davidovici, will be joined by guest cellist, German Marcano, in a powerful evening of chamber music at The Wertheim.

Flamboyant, daring, provocative, exciting, seductive and sensitive are some of the words used to describe one of today’s most formidable pianists, Kemal Gekic, whose playing has been acclaimed worldwide by public and critics alike. Born in Split, Croatia in 1962, Gekić amazed his family by accurately picking out melodies at the piano at age one and a half. The young prodigy received all his early musical training from his aunt, Lorenza Batturina. In 1978 he entered the class pf Prof. Jokuthon Mihailovich (a graduate of Moscow Conservatory) at the Art Academy of Novi Sad, Yugoslavia. He graduated in 1982 with the highest mark ever granted a diploma exam recital, and was immediately given a faculty appointment by the piano department which he eventually directed until 1999. During his school years he won prizes at the Franz Liszt Competition in Parma (1981), the Viana da Motta in Lisbon (1983) and the Yugoslav Artists’ Competition in Zagreb (1984). He earned his Master’s degree in 1985, the same year he created a sensation at the Chopin Competition in Warsaw. Although panned by the jury he won the hearts of audience and critics alike, and began receiving many invitations to perform abroad, including several from the Chopin Society of Hannover, Germany which had awarded him a special prize for best sonata performance at the competition.

A recording of his Warsaw performances sold 60,000 copies in Germany by the end of the year, and the Victor Entertainment Corporation, Japan (JVC) sold 80,000 copies of a CD version in their home country. In the years following the 1985 Chopin Competition, in addition to extensive concert activity in Germany, Denmark, Poland, Czechoslovakia, Bulgaria, Spain, France, Italy, Canada and of course Yugoslavia, he completed tours of the USSR and Japan-Southeast Rim. Programs of his life and his performances were broadcast by RAI Italy, TV Portugal, TV Yugoslavia, NHK Japan, POLTEL Poland, RTV Lower Saxony West Germany, RTV USSR, Intervision, CBC and PBS. Kemal Gekić is Professor of Piano and Artist-in-Residence at Florida International University, a position he has held since 1999.  Mr. Gekić ‘s web page can be found at http://www.kemalgekic.com.

In addition to his solo engagements, Mr. Davidovici is Artist-in-Residence and Professor of Violin at Florida International University and serves as guest professor at distinguished music schools around the world, most recently at Tokyo’s Musashino Academia Musicae, the Universities of Washington and British Columbia and the Australian National University. His multi-faceted career has included appointments as Concertmaster of the Vancouver Symphony Orchestra, The Netherlands’ Residentie Orkest and Japan’s Osaka Philharmonic Orchestra and Guest Concertmaster of the Cincinnati Symphony Orchestra, as well as the orchestras of the Chautauqua, Colorado and Grand Teton music festivals.

Germán Marcano currently excels among the most important cellists in the Latin American music scene.

Germán Marcano currently excels among the most important cellists in the Latin American music scene.

Marcano has combined his instrument’s traditional repertoire with Latin American compositions of the past and present times. He has auditioned works from renowned Venezuelan composers such as Modesta Bor and Inocente Carreño, and also auditions in Venezuela from different Latin American composers as Leo Brower, Alfredo Rugeles, Juán Orrego Sálas, Alberto Ginastera and Calixto Álvarez. His catalog of Latin American works for cello was published in year 2004 by the Vicente Emilio Sojo Foundation (Funves), with whom he has recently published an edition of the Suite for Cello and Piano by Venezuelan composer Modesta Bor. Last September Mr. Marcano released his first CD with his sister Clara, which includes works by Schumann, Beethoven, Debussy and others.

Since his arrival to the US, Mr. Marcano has make appearances in solo and chamber recitals as part of the Orchestra of the Americas, the Florida Grand Opera and the Atlantic Chamber Orchestra. He also teaches regularly at Kalos Music and Art Academy in Aventura.