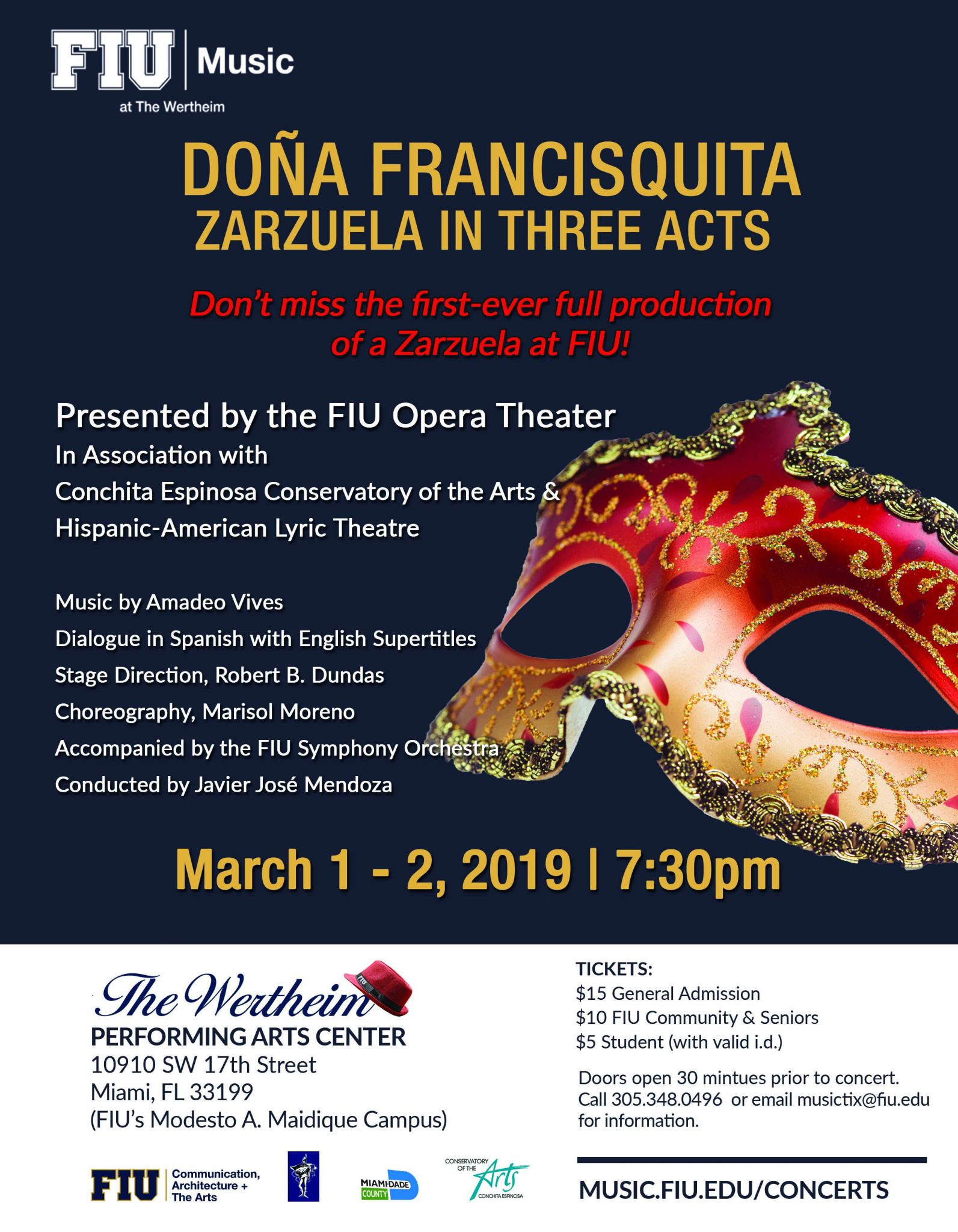 The Herbert and Nicole Wertheim School of Music & Performing Arts is bringing the tradition of Zarzuela to Miami! Through a collaboration highlighting the talent of FIU Opera Theater students and dancers from Conchita Espinosa Conservatory of the Arts, this will be the first-ever full production of a Zarzuela at FIU.
Follow the charming story of Doña Francisquita, a comedy based on the story of two young lovers, Francisquita and Fernando, during Carnival season in Madrid. Songs and dialogue in Spanish with English supertitles. Directed by vocal professor Robert B. Dundas. Choreography by Marisol Moreno. Accompanied by the FIU Symphony Orchestra and conducted by Javier Jose Mendoza. Music by Amadeo Vives. Book & Lyrics by Federico Romero & Guillermo Fernández Shaw. Generously sponsored by the Hispanic-American Lyric Theatre.

Zarzuelas could be anything from serious stories, retelling of folk tales, or comedic slapstick productions, and enjoyed great popularity in Spain throughout the 17th and into part of the 18th century.

However, in the 18th century Italian artists began influencing most art forms across the Mediterranean. A tastes trended towards the more Italian standard operatic style, the age of Zarzuela’s popularity seemed at an end. Zarzuela performances ebbed for nearly a century.

Then, in the 19th century, after what was deemed the Glorious Revolution of 1868, the country fell on hard times. This of course was reflected in the theater. As the public could not afford high priced entertainment, short one act plays with low budgets became popular quickly, and the Zarzuela adapted immediately to the cultural shift.

This is how Zarzuela grew back into prominence. There were two types of Zarzuela’s in this ‘Romantic Age’ of the tradition, the chico – which were generally one act, often salubrious or farcial productions, but cheap – and the grande – which were longer more traditional operatic productions.

The Zarzuela tradition grew back and remained into the 20th century and even began to take on an Operetta like quality to some of them, such as one of the most popular Zarzuelas, El Barberillo de Lavapiés, both light in humor and action, but bold in its social criticism. (Referenced from colorfullyspain.com.)