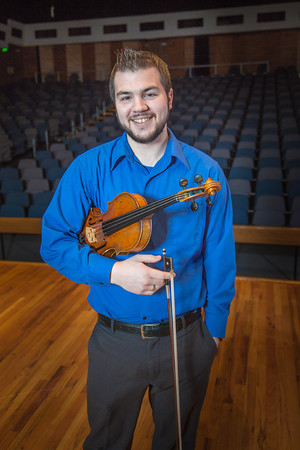 Franz Felkl was born and raised in Juneau, Alaska. He started his violin studies with a local teacher at age four and continued his studies in high school with Mrs. Linda Rosenthal. Upon his acceptance into the University Alaska of Fairbanks he continued his studies with Dr. Kathleen Butler-Hopkins. Mr. Felkl received a Bachelors in Violin Performance and a Bachelors of Music Education K-12 from the University of Alaska Fairbanks.

As an educator he has worked as a coach in a chamber music setting for young artists, taught at music camps for young musicians, and worked with the Fairbanks Youth Symphony Orchestras. In the fall of 2013 Mr. Felkl worked as a student teaching intern with the Fairbanks Northstar School District as part of his music education studies. He worked with cooperating teachers in the elementary and middle school programs. The following spring he continued to teach within the district as a substitute teacher, primarily focusing on the music classrooms.

In the spring of 2016 Mr. Felkl recieved his Masters of Music in Violin Performance from Lynn University Conservatory of Music where he studied with Mr. Elmar Oliveira. During his time at Lynn he acted as Concertmaster of the Lynn Philharmonia and participated in many different chamber music groups. Recently he has held positions in Florida Grand Opera and Palm Beach Symphony as well as played in numerous other groups in the South Florida area. Mr. Felkl is the second violinist of the Amernet String Quartet, Ensemble-in-Residence at Florida International University. At FIU, he also teaches music business.