Get Started Today!
ABOUT THE PROGRAM
Instructors and Presenters
HOW TO ENROLL
About The Director
CAMPUS LOCATION

Journalism Jumpstart is a FREE program for middle and high school students designed to invigorate and cultivate the minds of young writers. Its mission is to provide training, resources, and support for traditional and non-traditional media programs across the Miami-Dade and Broward counties.

The program became part of the Florida International University College of Communications Architecture + the Arts (CARTA) Department of Journalism + Media in 2021. The program’s director, Dr. Karla Kennedy, is a former Miami-Dade County Public Schools student media adviser and journalism instructor. Dr. Kennedy first started the program to help the schools in Portland, Oregon that no longer supported journalism programs in their schools.

Through a partnership and grant from the Dow Jones News Fund, FIU’s Journalism Jumpstart aims to promote a more diverse national media by giving students the opportunity to collaborate with media professionals and instructors with the goal of helping students produce articles and other media for publication. Students work will be showcased on the Jumpstart Journal Webpage.

The program is housed at the Biscayne Bay Campus of FIU located at 3000 N.E. 151st North Miami, FL. The dates and hours of the program are June 20th to July 1st, Monday through Friday from 10 a.m. to 4 p.m. This year, attendees with also have the opportunity to work on FIU’s South Florida Media Network student news program, Newsbreak. 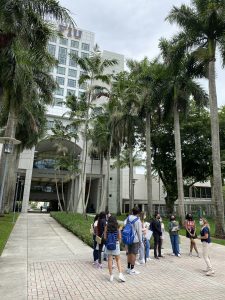 The stories on this website are a product of Journalism Jumpstart: Finding the Journalist Within, a free three-week intensive program targeting Miami Dade and Broward high school students that was held from, June 21 to July 12, 2021 on the Biscayne Bay Campus of Florida International University.

The program, hosted by FIU’s College of Communication, Architecture, and the Arts was partially funded by the Dow Jones News Fund. Students worked one-on-one with a writing coach, conducted interviews with practitioners and professionals in health-related fields and worked with professional journalists to produce the following multimedia articles. 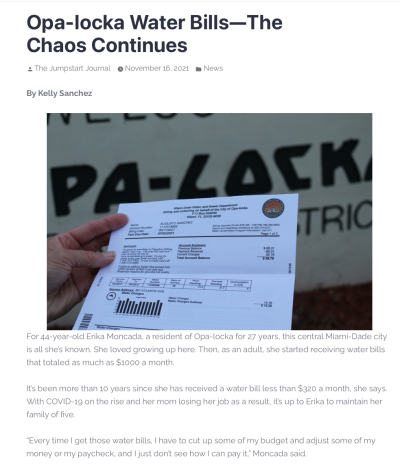 Instructors and presenters include:

The program is open to all students of Miami-Dade and Broward counties. Enrollment is open for everyone. Students do not have to be part of a school-sponsored program and can be of any level in their writing careers. Simply click here and complete the application before the deadline. The program is free of charge and lunch will be provided. Students who live in the in the southern region of Miami-Dade County can receive transportation to BBC via the University’s shuttle bus from MMC. 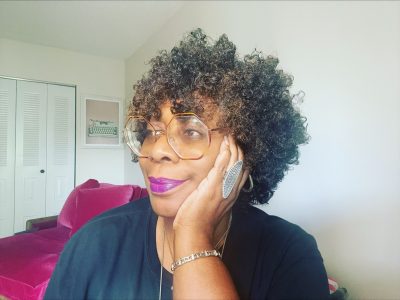 Kennedy has a rich history in scholastic journalism. In fact, she was the editor of her high school newspaper and worked on the yearbook at Miami Northwestern Senior High. Her love and passion for student voice happened in middle school when she became intrigued with the First Amendment, particularly the protected right to free speech.

In 2000, she met Dr. Lillian Kopenhaver, Florida International University Dean Emeritus, as a student in the Student Media Advising course. The course was packed with viable strategies and information that could be applied in the classroom at any time. What she learned in that first course, would have an everlasting effect, and changed and shaped her trajectory as a teacher, student media adviser, and scholar.

Kennedy went on to complete her master’s degree in Student Media Advising from FIU and obtain a Ph.D. in Mass Communication from the University of Florida. Her research focused on First Amendment court cases involving student speech. Her dissertation dealt with the infamous Supreme Court case, Morse v. Frederick (Bong HiTs 4 Jesus) and its effect(s) on society’s perspective of student voice.

In 2012, she moved to Portland Oregon and worked for the University of Oregon as the inaugural Scholastic Journalism Outreach Coordinator. In that role, she also served as the Executive Director of the Northwest Scholastic Press Association and organized the state’s annual event, Fall Press Day.

She has been the guest speaker and panelists at many events and facilitated and presented at national, regional, and local events, conferences, and workshops. She was awarded the Rev. Dr. Martin Luther King Jr. Diversity Award from the University of Oregon and was honored as the Morty Schaap Florida Journalism Teacher of the Year award from the Florida Scholastic Press Association.

The Biscayne Bay Campus (BBC) is a waterfront, 200-acre campus. It’s home to some of FIU’s highest ranked programs and most innovative labs. It is the birthplace of the South Beach Wine and Food Festival, the North Miami Brewfest, and other unique activities and experiences.

BBC has its own campus culture (dubbed the Bay Life), student housing, library, and recreation center. The campus is right on the bay, literally, and because of its stunning location, it offers unique adventure recreation and one-of-a-kind access to Florida’s aquatic ecosystem.

The campus is locally managed by the Office of the Vice Provost. BBC has partnered with local institutions including MAST@FIU, the only public high school in Florida that enjoys a collaborative partnership with a public university. The campus also houses the Osher Lifelong Learning Institute. OLLI provides a distinctive array of non-credit educational experiences and social engagement opportunities specifically developed for adults aged 50 or older. In partnership with Royal Caribbean Cruise Ltd., BBC features the ROYAL@FIU World Stage Collaborative, a 130,000-square-foot, state-of-the-art rehearsal and production studio. Other exciting initiatives are taking shape at BBC such as the completion of a brand new FIU Immersive Studio for Altered Reality.

Learn More About FIU at BBC